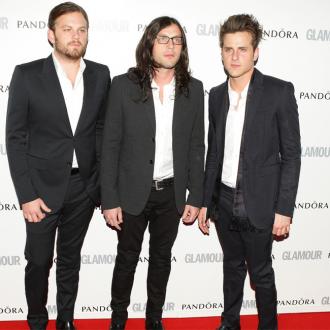 Kings Of Leon have revealed their new album title is inspired by John Travolta.

The rockers have decided to call their upcoming sixth LP 'Mechanical Bull' and drummer Nathan Followill says the band were watching Travolta's 1980 movie 'Urban Cowboy' - which features a fake bull in honky-tonk bar Giley's - a lot during the sessions.

Speaking to MTV News, Nathan said: ''We were so early in on the process of it; we had narrowed it down to three names, and 'Mechanical Bull' won out. I know we watched a lot of 'Urban Cowboy' during the making of this record, so that definitely probably had something to do with it.''

Nathan - who is joined in the group by frontman Caleb Followill, bassist Jared Followill and guitarist Matthew Followill - also revealed the album has songs similar to the energetic tracks found on their first two records, 'Youth & Young Manhood' and 'Aha Shake Heartbreak'.

He explained: ''Going in to this record we knew we wanted to have fun and make songs that are fun to play on stage. We challenged ourselves quite a bit. I think it was very hard for Jared to have to dumb down his bass playing on some of these songs, but it fits. There are some songs where I don't even hit a cymbal.''

Kings of Leon have debuted new tracks 'It Doesn't Matter' and 'Supersoaker' live on their current tour and the album 'Mechanical Bull' is set for release on September 23.