Review of The Night EP by King Dinosaur

I am going to begin this review with an apology for my own stupidity. When I get the choice of what I want to review, I usually head over to Google and have a little preview listen so that I know what I'm dealing with, so that I don't end up with a load of albums by bands from a genre I know absolutely nothing of. It just so happens that King Dinosaur is quite a popular band name. Have a look for yourself at the first search result for 'King Dinosaur' on Google; I thought I was getting rockabilly. Lesson number one for bands: always check that nobody else has your band name so that mugs like me don't mess up. 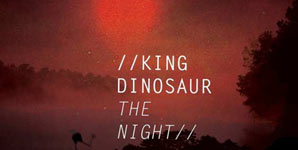 I pride myself on being quite broadminded with music, and I can confirm that King Dinosaur is absolutely millions of miles away from being a rockabilly act. Now, despite my broadmindedness, I will confess to being more of a rock guy and that my knowledge of electronic music extends very little further than a few tracks from Moby's back catalogue. What little I do know about electronic music though, I will comment on.

First of all, this whole EP has pretty high production values. It sounds absolutely great. It is clear, immersive and ambient pretty much throughout, and there are always little variations and movements happening beneath the surface which only really reveal themselves with repeated listening. The EP's title track alternates between soft, ambient vocal lines coupled with loads of atmospheric synths and that glitchy two step sound that all the kids are into these days.

The rest of the EP has a little less mainstream appeal, opting for less of the lush atmospherics of the title track and going more for the mind-bending, weird noises and odd, skittering beats making it a challenging listen for a newcomer such as myself, but you can tell that a great deal of imagination and effort has gone into putting these sounds together.

I feel I've done King Dinosaur a complete injustice here, which I will once more apologise for. Sorry about that King Dinosaur, but at least you're not in a rockabilly band.