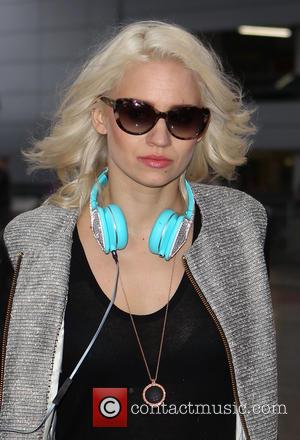 Singer Kimberly Wyatt feared her fairy tale wedding would be a washout when torrential rain and flooding hit the site in the run-up to her big day.

The former Pussycat Dolls star wed model Max Rogers at a stately home in the English countryside earlier this month (Feb14) but weeks of downpours blighted the region as severe flooding hit the U.K.

The area around the wedding venue, in Surrey, England was among the worst affected and the American singer feared the wedding would be ruined. Disaster also struck elsewhere when several imported bridesmaids' dresses were impounded by U.S. border officials.

Wyatt tells British magazine Hello!, "A week before the wedding there were floods all around the venue, but on the day the sunshine came out - I was not expecting that. Also I found out afterwards the bridesmaids' dresses had got stuck at U.S. customs and that my sister only got her dress at 9.30am, and she was leaving for her flight at 10am... Other than that it all went smoothly."

The pop star also admits she flirted with disaster by appearing as a contestant on British reality Tv show The Jump weeks before the nuptials without realising how dangerous the winter sports-based contest would be.

She adds, "It didn't really cross my mind how dangerous it would be when I signed on the dotted line. If anything, I felt skiing and skating was the perfect way to get in bridal shape. But when I got out there and saw how intense these sports were I knew I had to focus in order the stay in once piece."

Pussycat Dolls reunion will go ahead