Kimberley Walsh says her boyfriend was left ''running for the hills'' when people suggested they marry recently. 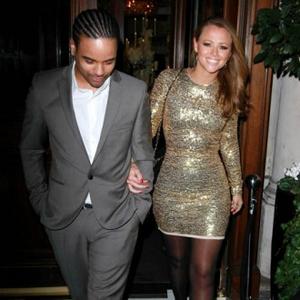 Kimberley Walsh's boyfriend is worried she wants to get married.

The Girls Aloud star - who has dated Justin Scott for seven years - admits her lover was left "running for the hills" after she caught the bouquet at her sister's recent wedding in France.

She explained: "I did catch the bouquet at my sister's wedding last weekend. So I think he's probably running for the hills right now! I'm joking. It was quite funny because I caught the bouquet and then everyone was like, 'Congratulations', like he's already asked me and he was like, 'Wow, I haven't asked her yet!' "

Despite the fact Justin hasn't actually popped the question, Kimberley admits her sibling's nuptials have made her think about what sort of wedding she would like one day.

She said: "It's funny because I've spent so much time helping my sister get hers ready, that it's made me think. Her wedding was small, in the south of France, really French and in a big chateau, so it was

amazing. I just thought I couldn't imagine how it could get more perfect than that, but I want my wedding to be my thing. I might have a small do, or decide to go for the full-on big wedding!"

Although she's not ready to settle down at the moment, Kimberley would love to start a family with Justin in the future.

She added: "In an ideal world, I think I'd like to get married and have children, but it wouldn't be a big deal if that wasn't the case. I love children, and when it's the right time I'll have them. My friend's pregnant so that's fulfilling my broody needs. Justin and I aren't really talking seriously about it, we're

just not at that point yet."