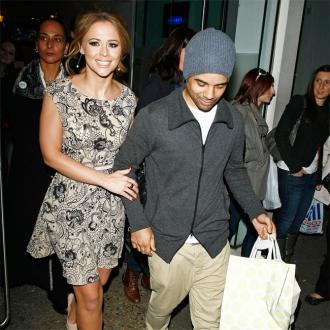 The former Girls Aloud star - who's been with Justin for more than a decade and who welcomed their first child, Bobby, into the world on September 4 - confirmed the news by posting a picture of her engagement ring on Twitter.

The announcement prompted former band-mate Cheryl Fernandez-Versini to share her own excitement with the 32-year-old beauty and former 'Strictly Come Dancing' star, tweeting a series of celebratory emotions.

What's more, Supersonic PR, the agency which represents Kimberley and Cheryl, 31, also tweeted a message of celebration, saying: ''Congratulations on the engagement @KimberleyJWalsh and Justin.''

The news comes shortly after Kimberley said she is ''totally in love'' with her new baby son.

The Bradford-born star said although she is still a bit ''shell-shocked'' about being a mum, she is besotted with her baby.

Writing in her OK! column, Kimberley shared: ''Bobby and I are both doing well and Justin and I are totally in love with him - I can't stop staring at him!

''Like most new mums, I feel a bit shell-shocked, but Justin's being an amazing support and fortunately feeding is going well so far.''