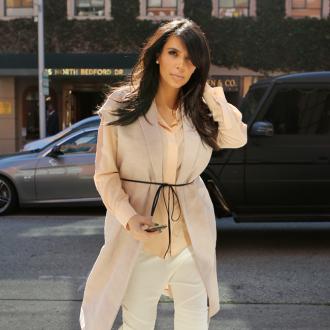 The former couple - who have been fighting about how to legally end their 72-day marriage since October 2011 - re-shot scenes of the 28-year-old basketball player popping the question to the reality TV star because she didn't like how she looked during his original proposal, according to a deposition given by Russell Jay, who is producer on 'Keeping Up With The Kardashians', ahead of their divorce trial.

According to a transcript of the deposition - obtained by Life & Style magazine - Kim was ''completely surprised'' by Kris' first proposal and asked for the scene to be filmed again because ''she didn't like how her face looked in the first take''.

Russell also claimed that a scene where Kim confessed to her mother, Kris Jenner, that she was having trouble in her marriage was actually shot after she filed for divorce, and that another scene which saw the then-couple argue after Kris had a hotel party with girls while Kim was supposed to be out of town was also ''faked'' and that she was actually present the entire time.

A source close to Kris ''feels vindicated'' by Jay's confirmation that some scenes were ''faked'' and thinks his deposition will strengthen his case against Kim.

The insider said: ''They set Kris up to look like a jerk. Anyone who loves someone would not team up with their production team to make them look like a fool on TV.

''It's obvious they were trying to tarnish his reputation. This will prove how fake Kim and the show are.''

But a source close to the 32-year-old beauty claims she is relieved the news has come out as it proves that she did not commit ''fraud'' and dupe Kris into marrying her, and that he was fully aware how the reality TV show worked.

Kim has accused Kris of holding her hostage through their divorce as he is fighting to have their marriage annulled because he believes she only married him for TV ratings.