Kim Kardashian's Sex Tape Was Staged? By Her Mother? 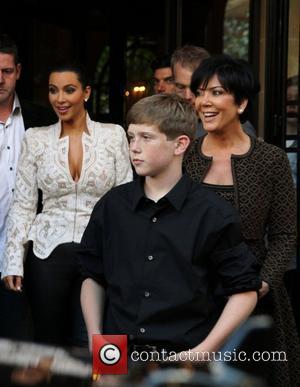 Kris Humphries has turned up the heat on his divorce from Kim Kardashian, by claiming her mother Kris Jenner staged her infamous sex-tape with Ray J in order to make her a star. Humphries says Jenner not only directed the tape, but made her re-shoot it because the first take wasn't good enough.
Humphries sensational claims were made in conversations and text messages to his former girlfriend Myla Sinanaj, according to Tmz.com. Sources say Myla has numerous messages in which Kris says she is the love of her life, and wants to get his divorce from Kim finalized as quick as possible. The information is potentially hugely damaging to Kris Jenner - who acts as the business manager for the Kardashian clan. Sources close to the family say Kris is lying about the sex tape, and that Kim made it clear at the beginning of their relationship that she would not discuss the tape because she didn't want to be judged by it. Both parties appear to be stepping up their respective media campaigns as divorce proceedings begin in Minnesota this week. Kim recently told Oprah Winfrey she was "bored" during her 72-day marriage to the New Jersey Nets star, though sources tell the New York Daily News that the comments were a "sympathy play" designed to drum up public support.
As has been widely report, Kardashian is now dating the rapper and international superstar KANYE WEST.