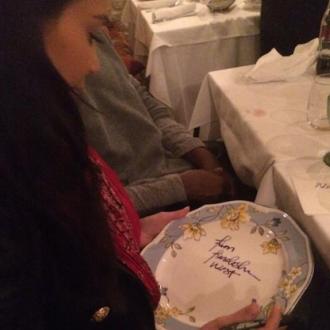 The reality TV star, who married 'Bound 2' rapper Kanye West in a lavish ceremony in Italy on May 24, had already changed her name on Twitter and has now used her new signature for the first time.

Kim, who has 11-month-old daughter North with Kanye, posted a photograph on her blog in which she is seen signing a plate as 'Kim Kardashian West'.

She excitedly captioned the snap: ''We were in Prague and we signed plates for the restaurant. This is the 1st time I signed West!! Xo (sic)''

The newlyweds travelled to the Czech Republic to attend the wedding of Kanye's stylist Renelou Padora, following their own nuptials and honeymoon in Ireland.

The 33-year-old beauty and her new husband went sightseeing and embarked on an hour-long mountain trek in Ballyhoura, where Kanye, 36, had biked a number of years ago while visiting the country for work.

The two also enjoyed a date night at a cinema in Tullamore and Kim rubbished rumours she'd found every second of her time in Ireland ''boring''.

She posted on Twitter: ''We spent Kanye's bday in Ireland a few years back & fell in love with it (sic)''

She added: ''Its such a calming relaxing place! (sic)''

When a fan asked how she is finding married life, Kim also replied: ''Love being Mrs. West. (sic)''