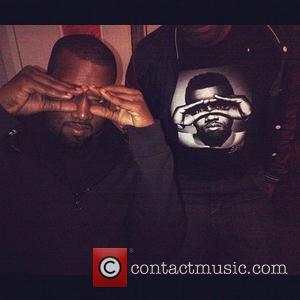 Picture: Kim Kardashian posted this image on Instagram of Kanye West with the caption: Watch the Throne

Kim Kardashian had to remind her boyfriend Kanye West who he was dating after the rapper took to the dance-floor with his pal Jay Z before chatting at length with the renowned fashion designer Stella Mccartney at a club in London over the weekend.
The new couple were just a few of the high profile celebrities packed into the Dstrkt club in the capital for an exclusive bash to celebrate Jay Z's manager Tyran Smith's 40th birthday party on Saturday (May 19, 2012). The A-listers were certainly out in force, with the likes of Chris Martin and Gwyneth Paltrow also in attendance, as well as Rita Ora, Tinie Tempah and Fazer, formerly of N Dubz. Though Kim and Kanye were the most high profile guests, there appeared to be unrest in the relationship, with a source telling the UK's Sun newspaper, "Kanye was loving it on the dancefloor with Jay Z and spoke at length to Stella (MCCartney) about fashion.Kim was all over Kanye at the start, but when he started to mix with other people she had a stern word and took him away from the party". The insider added that Kanye "followed her orders with minimum fuss", adding, "He knows the deal".
Never one to shy away from attention, Kim posted her latest provocative snap on Twitter this weekend, perhaps in a bid to promote the latest series of 'Keeping up with the Kardashians', which premiered on Sunday (May 27, 2012).