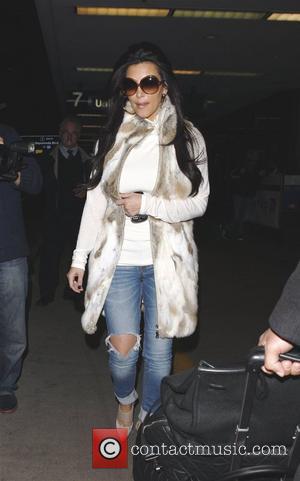 Kim Kardashian has announced that he has landed a guest role on Drop Dead Diva. Kardashian has written on her blog "I am so excited to announce that I'll be guest starring on Drop Dead Diva season four this summer! My character is called Nikki, who is Ben's new love interest and starts a business venture with his ex, Stacy!" The legal comedy-drama has been on air since July 2009 and stars Brooke Elliott and Margaret Cho, as well a Ben Feldman as Fred.
Kim, who says she "can't wait" to work with everyone on the programme is more used to playing herself onscreen; she has made her name by appearing in a number of reality TV shows with her family, such as Keeping up with the Kardashians and Kim and Kourtney Take New York. She will be joining a long list of celebrities who have made guest appearances in the show, though. The alumni of Drop Dead Diva includes such luminaries as Liza Minnelli, Paula Abdul and Leann Rimes. It's not the first time that Kim has tackled a fictional role, though. She has previously appeared in How I Met Your Mother and 90210 and has a number of film credits to her name.
The Press Association report suggests that Kardashian's character, Nikki, will make a number of appearances on the show's fourth series, which is due to be shown in the US this summer.