Kim Kardashian To Have '1,000' Wedding Guests

Kim Kardashian is to invite ''at least 1,000'' guests to her wedding to basketball player Kris Humphries later this summer. 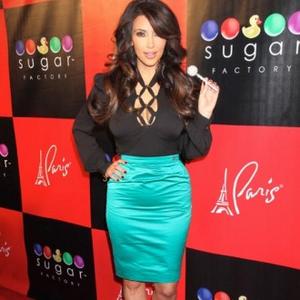 Kim Kardashian is to invite "at least 1,000" guests to her wedding.

The 30-year-old socialite - who is to marry NBA star Kris Humphries later this summer - wants her nuptials to be a huge occasion which will eventually air on one of her reality TV shows.

A source told National Enquirer magazine: "There's no location yet, but Kim is already invited at least 1,000, and the list is getting longer. The original idea was to have a wedding on each coast, but she now wants one huge wedding.

"She'll probably reveal where the ceremony is. She hopes to make a huge entrance. She's having guests sign confidentiality agreements.

The brunette beauty is also hoping to follow in the footsteps of Prince William and Duchess Catherine by having a wedding that attracts the attention of the world, and she and sister Khloe have already met with designer Vera Wang on a mission to find a show-stopping dress.

The source added: "Kim and Khloe met with Vera Wang to discuss the dress. Kim wants it to be tight-fitting, with a magnificent train. And she's having diamonds embroidered on it!

"When she leaves after the ceremony, she wants everyone watching her just as she waves. Just like William and Kate!"