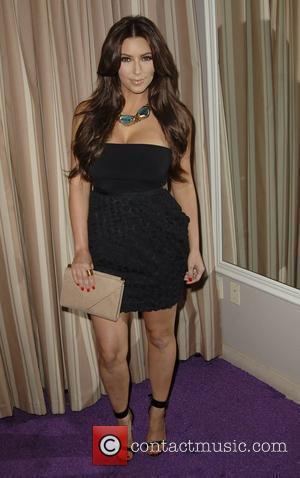 Kim Kardashian celebrated her upcoming wedding with a bizarre bachelorette party in Las Vegas over the weekend. Kim partied at the exclusive Tao nightclub where she had hired scantily clad female dancers and a stripping dwarf, reports the UK's Daily Mail.
The reality star, who is set to marry Nba player Kris Humphries, partied with sisters Khloe, Kourtney and mother Kris while enjoying a selection of extravagant cakes and champagne. Meanwhile, Humphries was celebrating his stag do at the nearby Lavo club before Kim gate-crashed her husband-to-be's party at around 2am. She joined Humphries, Lamar Odom and Scott Disick in the exclusive Vip area for around 10 minutes before leaving him alone for the rest of the evening. Kim, who had arrived into Vegas by private jet, donned a beige leather dress with matching heels and tiara for the evening. Other celebrities at the bash included Lala Vasquez Anthony, Brittny Gastineau and her future sister-in-law Kaela Humphries. Speaking on Twitter the following morning, Kim told followers, "Amazing nite! DJVice killed it! The ladies shut down Tao".
According to reports, Kardashian will tie the knot with Humphries in California on 20th August 2011.