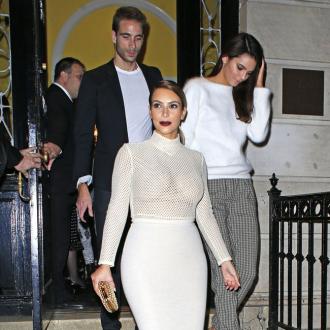 The 'Keeping up with the Kardashians' star straddles her fiancee for a steamy kissing session while he drives a motorcycle in raunchy new visuals for 'Bound 2', the latest release from the rapper's 'Yeezus' album which premiered on the 'Ellen Degeneres Show' on Tuesday (19. 11.13)

The 33-year-old beauty flaunts her famous curves wearing only tight trousers and a pair of high heeled boots as she proudly shows off the results of her 50lbs weight-loss following the birth of her daughter North West in June.

The couple are later seen caressing each other and sharing a passionate embrace as they ride through Monument Valley in Utah.

Upon premiering the video - which was directed by fashion photographer Nick Knight - Kanye spoke about his relationship, and joked they had been ''practicing all the time'' when quizzed by Ellen if they planned Kim's pregnancy.

Kanye also spoke about his public declaration of love for Kim, following his lavish proposal last month where he rented out the entire A&T baseball stadium in San Francisco, before popping the question in front of a fifty piece orchestra.

Kanye explained: 'It was just awesome. I think that Kim is awesome and she just deserved like awesome moment like that.

''I knew I had to turn up more because I think people expect even more from me in every situation whether it's an album, a video or concert, or you know an engagement. I may have taken it to a completely, you know, yeah... another level.''