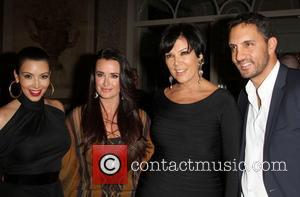 Kim Kardashian is reportedly so scared by a recent trespassing incident at her home, that she has decided to move into a rented property. The Daily Mail have published aerial photos today (February 29 2012) of the 6,700 square foot estate that Kim is said to be renting, at the cost of $40,000 per month. The move has been promoted by a stranger turning up on her doorstep, saying that he intended to stay the night at her home.
According to the report, the man showed up, buzzed the intercom at the security gate and claimed that Kim had flown him into Los Angeles to stay with her. He refused to leave, claiming that he was there to work on her reality show and Kim was forced to call the police, to have him removed from the premises. The property that she is alleged to have moved into is described by the realtors as having "Craftsman-Asian fused architecture with a lush, tropical landscape surrounding an infinity pool with valley and mountain views. The location of the new pad is said to be close to the $5 million property that she bought in 2010 but far enough away to put her mind at rest about the unsettling incident.
On Sunday night, Kim attended Elton John's post-Oscars Aids fundraiser, with her elder sister Kourtney Kardashian. News of Kourtney's pregnancy was unveiled last week, with the Kardashian sisters and the family matriarch Kris Jenner all announcing that Kourtney's baby is a girl.