Kim Kardashian lands the cover of US Vogue

Kim Kardashian says securing the front cover of the April issue of US Vogue with her fiancé Kanye West is ''a dream come true.'' 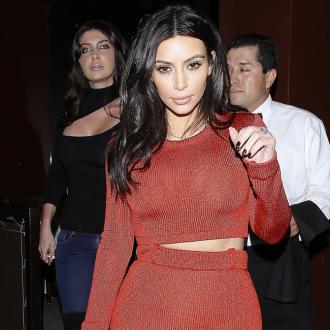 Kim Kardashian says securing the front cover of US Vogue is ''a dream come true.''

The 'Keeping Up with the Kardashians' beauty was snapped by famed photographer Annie Leibovitz for the magazine's April issue with her rapper fiancé Kanye West, after he reportedly spent more than a year trying to convince its editor Anna Wintour to like the reality TV star.

Clearly ecstatic, the 33-year-old star shared an image of the cover on Twitter, which shows her wearing a strapless white wedding dress with Kanye standing behind her with his arms wrapped around her waist, a nod to their upcoming wedding in Paris on May 24, shortly after it was released on the magazine's website on Friday (21.03.14).

She tweeted: ''This is such a dream come true!!! Thank you @VogueMagazine for this cover! O M GGGGGG!!! I can't even breath! (sic)''

A source first revealed in March 2013 that Kanye was on a mission to get Kim on the cover of Vogue despite Anna allegedly branding Kim as ''the worst thing since socks and sandals.''

The insider also claimed that the style icon said Kim would only appear in the esteemed magazine ''over her dead body''.

Kim and Anna's feud has been well documented in the past.

The 'Keeping Up With The Kardashians' star was banned from attending the star-studded Met Gala in New York in 2012 because Anna believed she ''didn't fit the bill,'' and she was only invited to the annual event last year because Kanye was performing.

A source said at the time: ''Anna hates Kim. Why would she be invited to the event? It is all the biggest stars in the world and Kim doesn't fit that bill at all. The Met Gala is $25,000 a ticket, but Kim couldn't even buy her way in.''

The fashion editor also allegedly ignored Kim at New York Fashion Week in September 2012, but she recently sat beside Kim's half-sister Kendall Jenner at Topshop's runway show at London Fashion Week suggesting the famous family had finally won her over.