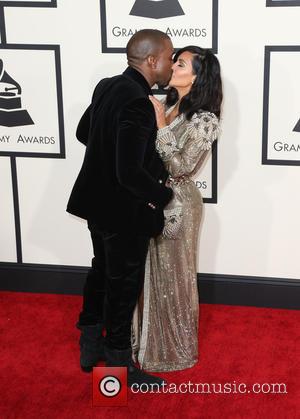 Picture: Kim Kardashian and Kanye West - A variety of stars from the music industry all turned out in style to attend the 57th Annual Grammy...

Kim Kardashian insists Kanye West is not a "controlling" husband and only gives her fashion tips as he always wants her to look her best.

When the married couple first began dating in 2012, West changed her wardrobe by throwing out clothes he did not like from her closet and buying her new outfits.

The incident was shown on reality show Keeping Up With the Kardashians, and her fans protested that West was trying to control her appearance, but she insists this is not the case, and he simply intervenes with her fashion choices to "update" her look.

Kardashian tells Love magazine, "I was obsessed with glitter, rhinestone heels and the kind of clothes I now laugh at, and he threw them all out. I said, 'Well, I'm going to save them for my daughter one day'. And he said, 'Well, if it's going to be our daughter, she's never going to wear those.'

"I'd never spent time in London or Paris or seen what style was like around the world, so he wanted to bring in stylists from all over the world just to update my look... But to my fans - they saw this new guy come in and clean out my closet and they thought that was a sign of him being controlling. But it wasn't that at all. He made me love fashion so much more... And I love doing photo shoots more now because I'm not afraid to wear different things. In the past, I'd have said, 'No, I wouldn't feel comfortable in that'... So it's been a great education."

She addresses speculation West is trying to get her to leave her family show, adding, "There are always so many different rumours out there, and headlines like 'Kim quits the show!' or 'Kanye wants her to quit!' as if he's so controlling. But I'd say he's the most liberal, free husband in the world. He always want me to do what I want."