Kim Kardashian Was Joined By Her Closest Family And Friends To Celebrate Her Baby Shower Over The Weekend (24-25oct15). 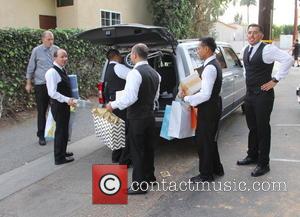 The reality TV star, who is expecting her second child with rapper Kanye West, took part in a pyjama party at a house in Beverly Hills, California on Saturday (24Oct15).

Kim was joined by her sisters Kourtney and Khloe, half-siblings Kylie and Kendall, mother Kris and father Caitlyn Jenner, and pictures show the family wearing striped sleepwear for the Girl Scouts-themed bash.

There were tents set up in the living room of the property to add to the theme, which was inspired by Kim's favourite film Troop Beverly Hills. Other guests included British supermodel/actress Cara Delevingne and model Gigi Hadid.

Khloe has scrapped a planned book tour so she can be by his side as he recovers from a medical emergency, during which he reportedly suffered a series of debilitating strokes.

The former basketball player was found unconscious at the Love Ranch South brothel in Nevada on 13 October (15) after a reported drug overdose. He has since undergone two emergency surgeries and is in a stable condition at Cedars-Sinai Medical Center in Los Angeles.