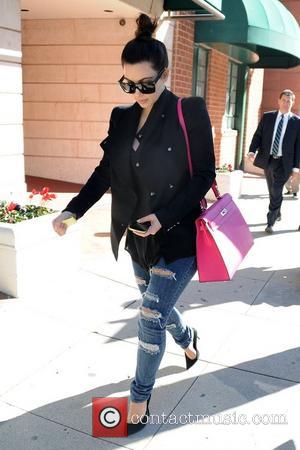 Picture: Kim Kardashian seen wearing a casual-chic outfit while out and about in Beverly Hills Los Angeles, California- 20.12.12

Kim Kardashian must really be sick of people asking her what she's famous for because she has actually been doing what can only be described as work (in a sense) over the past few months.

Now, her latest professional turn sees her in front of the camera and actually acting (well...) rather than whatever she normally does when she's being filmed. Clearly, this is big news.

The new trailer for Tyler Perry's next movie, Temptation: Confessions of a Marriage Councillor, shows Kim K in the role of Ava, a sassy matchmaker, who in the trailer is seen disparaging a co-worker's fashion sense since it’s not representative of their business - I wonder where they came up with that character development? As well as talking about clothes, Kim's character also dates rich men, but then again did anyone really expect to see her as Lady MacBeth in her first role?

Vanessa Williams, Jurnee Smollett and Brandy Norwood also star in the film, which was written, produced and directed by Perry. In the film, Judith (Smollett), a marriage counselor turned high-profile matchmaker, has an affair with a client (Robbie Jones) that wreaks havoc on her personal and professional lives. Things get even more complicated when the consequences of her temptation impact her long-term relationship with husband Bryce (Lance Gross).

Temptation: Confessions of a Marriage Counselor hits theatres on March 29, 2013.