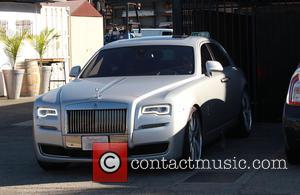 They became first-time parents in 2013 when they welcomed a daughter, who they named North West.

Kim is currently expecting the couple's second child, and she was quizzed over potential names for the tot during an interview with U.S. TV's Ellen Degeneres.

During the show, Ellen threw out several suggestions until Kim revealed her current favourite.

However, the Keeping Up With The Kardashians star admitted she has yet to persuade her husband to agree.

"I do like the name Easton," she explained. "I don't think my husband likes that name, but I do like it. I don't think we'll go another direction (sic). It's definitely not South... Everytime someone says South I wanna roll my eyes... I do like Easton, I don't think Kanye likes Easton. I'm not sure."

Kim went on to reveal she is in no hurry to pick a name, adding, "I'll start thinking at about eight months. So I've got about another month to go."

Rumours that the name Easton had been chosen by the couple first emerged in August (15). Kim has previously been adamant she will not be calling the new baby South.

"I don't like South West, though, because that's like, you know, North will always, you know, be better and be more... she has a better direction... So I wouldn't do that... Everyone keeps on saying South, and I think it's so stupid. It's the stupidest thing ever."

Kim is expecting a son to join her daughter North. The baby is due at the end of the year (15).