Kim Kardashian ordered Kanye West away from a party on Saturday night (19.05.12) because he spent too much time with fellow revellers at London's DSTRKT venue. 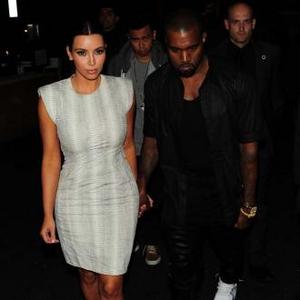 Kim Kardashian ordered Kanye West away from a party on Saturday night (19.05.12) because he spent too much time with fellow revellers.

But Kim - who has already banned girls from going backstage at Kanye's gigs - took him away from dancefloor as she was not impressed with the 'Gold Digger' hitmaker showing other revellers more attention than her.

A source told The Sun newspaper: ''Kanye was loving it on the dancefloor with Jay-Z and spoke at length to Stella about fashion.

''Kim was all over Kanye at the start, but when he started to mix with other people she had a stern word and took him away from the party.

''He followed her orders with minimum fuss. He knows The Deal.''

Rita took her boyfriend and Kim's brother Rob Kardashian to the party and the 'R.I.P' singer rarely left his side during sets by Shortee Blitz and DJ Kayper, while he faced competition from Rihanna who shared a kiss with the blonde beauty.

The 'We Found Love' hitmaker was so drunk she couldn't remember getting home and missed her flight back to Los Angeles, but Jay arranged a guest slot for her on the bill for his and Kanye's final concert at The 02 arena last night (20.05.12), which is part of their 'Watch The Throne' tour.