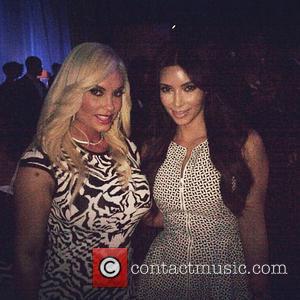 Kim Kardashian is set for another big TV wedding - her sister Kourtney has reportedly invited cameras to her upcoming nuptials for a cool $1 million (£625,000).
Sources close to Kourtney Kardashian have revealed the pregnant socialite is hoping to wed longtime boyfriend Scott Disick in Mexico, and just like her sister, she'll be exchanging vows on television.
In Touch magazine reports the couple will tie the knot at Girls Gone Wild boss Joe Francis' private Casa Aramara estate near Puerta Vallarta.
A source tells the publication, "Her family has been friends with Joe for so long. Kourtney has always considered Joe's home a place where she can really relax."
Kourtney will be hoping her televised wedding leads to a more successful marriage than her sister's - Kim and basketball player Kris Humphries were only wed for 72 days when she split from him and began divorce proceedings.