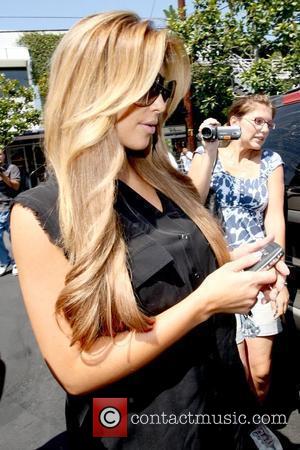 Socialite Kim Kardashian's sister KHLOE has come clean about her cocaine shame - after drugs were found in her handbag.
The reality TV star insists the scandal is not what it seems - she found a vial of cocaine in her store's changing room and decided to put it in her bag for safe keeping, then she forgot all about it until she was confronted by her sisters.
The cocaine controversy features as a plotline on an upcoming episode of Kardashian's new reality TV show Kourtney & Khloe Take Miami.
She tells Life & Style magazine, "My employee was picking up a pile of clothes that customers had tried on, and it (vial) fell out. She called me into the dressing room, and it was in a little glass vial. I was leaving the dressing room, and a lot of customers walked in. I didn’t know what to do, so I threw it in my purse. I was like, 'I’ll dispose of this in a second,' and I went to help them. Then I forgot about it.
"Nothing registered until after the fact. Now, talking about it, I’m like, 'OK, that would be really bad if I got (charged) with drug possession.' But I don’t do drugs. I don’t have drugs in my purse. I’m not someone who needs to do drugs... I’m too energetic and crazy as it is. I wouldn’t want to see me on drugs."
The drug stash could have had major repercussions for Kardashian, she is currently on probation for a drink driving arrest in 2007.