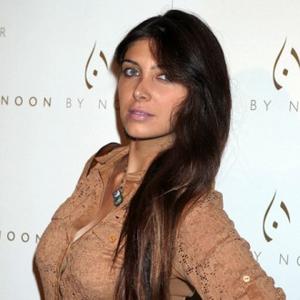 The 'Gastineau Girls' star has confessed she cheated slightly in order to catch the flowers - traditionally a sign as to who will be the next bride - at Kim's marriage to basketball star Kris Humphries on Saturday (20.08.11).

Brittny - a childhood friend of Kim's - told 'Entertainment Tonight': "I had a little talk with her when she was going to throw the bouquet. I said, 'Listen, you and I have been best friends the longest. I'd better catch this bouquet.' And she looks at me and she winks at me."

Many of the guests guessed it was fixed that Brittny would catch the bouquet, and playfully jeered her triumph.

Brittny - who was rumoured to be dating Olympic swimmer Michael Phelps last year - observed Kim had caught her sister Khloe's bouquet at her wedding to Lamar Odom last year, adding: "When a Kardashian throws a bouquet, it's lucky."

The 27-year-old socialite also revealed some details from the lavish nuptials - which was attended by 440 guests and saw Kim wear three different Vera Wang dresses and jewellery worth a reputed $6 million - and admits she was especially moved to see her friend looking like an "old Hollywood glamorous princess" as she was walked down the aisle by her stepfather Bruce Jenner.

She explained: "My favourite moment was when Bruce was walking her down the aisle and I just looked at her and I knew that this is finally here, this day that you've always wanted, and you met a great guy.

"Who would ever think that she would meet a guy named Kris with a K? That's when you know it's meant to be."

Brittny also revealed the food at the wedding was "unreal" and the wedding cake - a six feet tall layered cake from Hansen's Bakery worth $15,000 - was "To Die For."