Review of You Owe Nothing Album by Kill It Kid

It's true that it's sometimes a thin line between love and hate. One person's kitsch can be another's high culture. In music, as in film, it can often become a tightrope walk of unsurety for an artist, not knowing if they'll drop into the box of good taste and critical acclaim or into cliché corner. 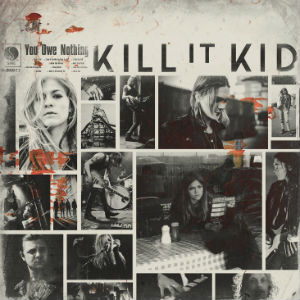 Kill It Kid have had it all over the last few years with many plaudits as well as the odd wobble. On balance, however, you'd have to say that since the release of their eponymous debut album back in 2009, KIK have been raved about more than they've been derided; hailed as one of the best new bands around at the time. Five years on from their warm welcome and ever more expectant audience, their sound has changed and the reception has shifted. The jury is not so much out on 'You Owe Nothing' as it is hung.

With a sound that is now more rock driven than ever, Kill It Kid have largely eschewed any need for subtleties and instead gone for a full on, in 'yer face, no holds barred aural onslaught. From the incendiary opening bars of 'Black It Out', the four-piece Somerset band go hard and heavy with scuzzy guitar riffs, throaty rasping vocals, acutely delivered in the main by Chris Turpin, and some potent percussion. There is little let up in intensity or immediacy through 'High Class' and 'Sick Case Of Loving You' (nice but under played piano) as Kill It Kid mix up a cocktail of White Stripes, Subways and Black Keys sounds. It's loud, it's raucous, it's fired up, it's full of energy and intent and it's certainly unflinching but, by throwing everything at the wall, KIK have not only had some good stuff stick they've also had some bad.

Where the album tracks work best are where the band either slow it down a tad or where the vocal reins are taken over, or shared more evenly with Stephanie Ward. Former single 'Caroline' stands out on the album because of this, it's more considered than almost any of the other twelve. From the sombre keys and tortured vocal start you're drawn in. Where other tracks may have been tempted to let rip at any given opportunity some reservation has been adopted and it pays dividends. Contrastingly, 'Blood Stop And Run' is as brutal as any of the songs on 'You Owe Nothing', but the bruising barrage of drum and guitar paired against Stephanie's vocal really works. Similarly, on 'Don't It Feel Good' the mix is enhanced as the band take on a Yeah Yeah Yeahs slant towards the latter part of the track. Finally, and refreshingly, there comes the most stripped back and acoustic of all the tracks, 'Law Of Love', where Stephanie's vocals are layered and harmonised to full effect.

Where the album doesn't work so well it sounds over worked, too much, a rough and raw trip around rock's rather pompous under belly where power and potency are lost to a strutting, posturing self parody. To a lesser or greater degree, for better or for worse depending on your take on it, 'Cheap Revival', 'Sick Case Of Loving You', 'High Class' and 'Black Out' all evoke a hedonistic spandex clad seventies era that doesn't necessarily need revisiting again.

KIK are walking that line where one person's Led Zeppelin can be someone else's Nickelback, where you're no longer hearing James Blake but James Blunt. It's obviously a subjective viewpoint but as much as the music is clearly honest and true to the band, it's also frustratingly flawed to a degree, it's trying too hard. I think Tony Scott made some great, certainly entertaining, films, but he was never likely to win an Oscar. Some may think Kill It Kid have made a great album, however, I think it unlikely to appear on any 'albums of the year' lists. Somewhat clichéd or pumped up triumph, you decide. 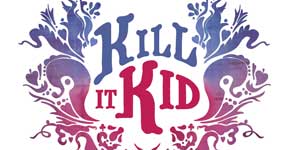 Kill It Kid - Self Titled