Kill Hannah star MAT DEVINE has become the latest professional rocker to halt his career for a Broadway role.
After Green Day's Billie Joe Armstrong and Melissa Etheridge both stepped onstage to play roles in American Idiot recently, Devine has signed up to portray Grim Hunter in the much-maligned Spider-Man: Turn Off the Dark.
Reports suggest the alternative rocker will play the role for a year - and he has put his band on hold to allow him to taste Broadway success. 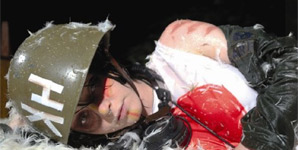 Kill Hannah - Wake Up The Sleepers