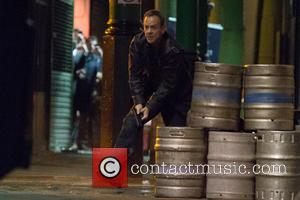 Picture: Kiefer Sutherland - Filming of U.S. television show '24: Live Another Day' continues in London. In these scenes, Steve Navarro (Benjamin Bratt) can be...

Kiefer Sutherland wants to buy a traditional London pub after falling in love with the city while filming the new season of 24 on location in the U.K. capital.

The actor has spent several months in London shooting the latest season of the action Tv show, and Sutherland admits he enjoys the city's social scene.

He now dreams of becoming a real life landlord by buying his own bar, telling Britain's The Sun newspaper, "British pubs are the best in the world. They are pretty much the only ones that have any authenticity about them. Every country in the world tries to recreate or replicate a British or Irish pub, but they never get it quite right.

"I would love to buy a pub in London, that would be so cool. I wouldn't be looking for a super-trendy place, just a real British pub where real locals come for a drink."