Kiefer Sutherland wants to make a '24' movie while his body is still able to portray the tough physical scenes that come with the part of counter-terrorist agent Jack Bauer. 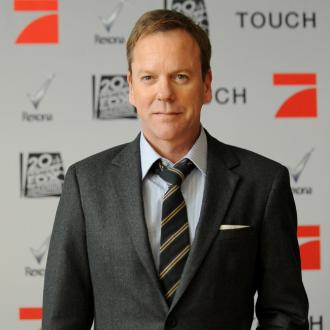 Kiefer Sutherland is keen to make a '24' movie while his body is still up to it.

The 46-year-old star - who played counter-terrorist agent Jack Bauer in the long-running TV series - wants to reprise his role on the big screen after realising he is still able to portray such physical action scenes that come with the part.

The actor - who plays the father of a boy with special powers in Sky One's 'Touch' - said: ''I want to make the '24' movie as long as I can run -- and last week I figured out I still could.

''I had to chase someone for the first time in a very long time and when we finished the scene, one of the crew said with a wink, 'That felt pretty familiar didn't it? Kind of cool to watch you run again. I didn't know if you could any more.'

''A lot of the physicality of Jack Bauer is actually starting to come in to play now, just because the stakes are now life-and-death.''

Last year it was announced filming of a big-screen adaptation of '24' had been pushed back to 2013, but director Antoine Fuqua - who was due to helm the motion picture - recently revealed the movie will not be happening.

But one project Kiefer - who was inspired to get into acting after watching nine of his father Donald Sutherland's films one weekend - does have lined up is a western movie with his dad, which will be the first time they have worked together on a motion picture.

He added to The Sun newspaper: ''We're going to make a Western together. It's the story of a son coming home from the Civil War after his mother has died.

''He and the father have not seen eye-to-eye for many years. But in an effort to save the family farm, they find each other.