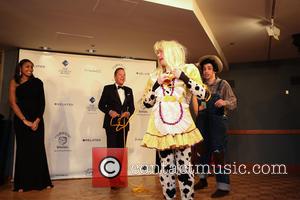 Hollywood star Kiefer Sutherland braved a snowstorm on Friday (08Feb13) to be named the 2013 Man of the Year by Harvard University's Hasty Pudding Theatricals drama club.

The actor was the guest of honour at a ceremony relocated to the Charles Hotel in Cambridge, Massachusetts, due to a blizzard which prevented students from hosting the wacky annual event on the Harvard campus.

He was made to wear a bra strapped with bombs in a nod to his role as tough agent Jack Bauer in hit Tv series 24, and performed onstage with actors dressed in drag during his roast.

French actress Marion Cotillard was unveiled as this year's (13) Woman of the Year and headed to Cambridge for her prizegiving earlier this month (Feb13).