Kiefer Sutherland feels ''very fortunate'' to have such a good relationship with both his parents, who split up when he was three years old. 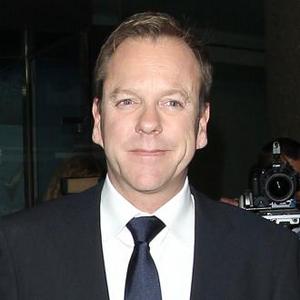 Kiefer Sutherland feels ''very fortunate'' to have such a good relationship with his parents.

The 'Touch' star's mother and father split up when he and Twin Sister Rachel were just three years old, and though he spent his childhood living with his mum, actress Shirley Douglas, Kiefer now has a very strong Bond with his actor dad Donald Sutherland.

He said: ''I feel that I've been really fortunate where my family is concerned.

''I grew up with my mother and I have a very, very close relationship with my father now.''

Kiefer - who has daughter Sarah to his marriage to Camelia Kath, and is also stepfather to her daughter Michelle, as well as to second wife Kelly Winn's sons Julian and Timothy - relates to the character he plays in 'Touch', a widower struggling to raise his son, who has apparent psychic powers, because of the ''great pain and frustration'' of parenthood.

He added: ''My character's fight really is with child services, who are trying to take his son from him. He wants to have as normal a relationship as possible with him, which I think every parent can relate to.

''I have two grandsons. I don't think anybody who has a child doesn't want the best they can possibly get for that child.

''The great pain and frustration of parenthood comes when we feel we aren't doing that.''