Liverpool rockers Kids On Bridges have made available a surreal video for their newest single 'Walls', which is scheduled for release on May 26th 2014 through Wall of Sound records. The track will appear on their forthcoming new album 'Kidology' due out later this summer.

The video features a young man running in terror from a mysterious hooded figure who, rather than chasing after him, walks measuredly behind him in an all too creepy manner. The man pleads for help from a stranger on a park bench, but loses his wallet as he quickly makes a get away when he envisions that the stranger has transformed in the hooded figure. A similar hallucination occurs when he greets his girlfriend back at his flat where he frantically starts to drink all the alcohol in his house. In his escape, he picks up a pretty blonde girl in the street, but she also appears to transform. The bluesy rhythm gives depth to this electro-rock number with its infectious chorus and guitar-led groove.

The song is thought to be inspired by the name of the record label which celebrates its 20th anniversary this year. With their new album, Kids On Bridges have been working with a range of people including Dr John, producer Steve Dub and drummer Zigaboo Modeliste. 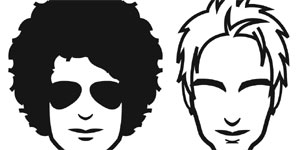