Kidda's new single, The Whistler, is the lead single from his second album Hotel Radio which was released via Skint Records. The female vocals come courtesy of Laura Vane, of Laura Vane and the Vipertones fame, who also appeared on The Streets' most recent single, OMG.

The video for The Whistler was directed by Scott Taylor and Andy Shrubsole. It depicts an affable looking man who spends a lonely day riding a tandem bike on his own, playing ping pong alone and eating a solitary picnic in a deserted field. The sad nature of the video is a very sharp contrast to the summery, bouncy pop tune.

Kidda's debut album, Going Up, was released in 2008 and contained many obscure samples, including the theme from a BBC show, Ski Sunday. Going Up received positive reviews and a remix of single Under The Sun garnered support from well-known DJs, Kissy Sellout and Annie Mac. 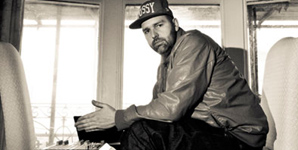