Kid Rock's Classic Car Has Quite A History 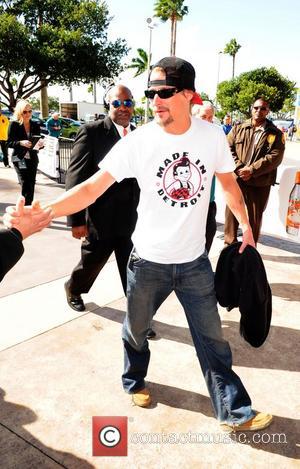 Picture: Kid Rock The Orange Carpet prior to the Detroit Lions vs the Miami Dolphins NFL Game at Sun Life Stadium Miami, Florida - 26.12.10

The 1964 Pontiac Bonneville Kid Rock drives in his BORN FREE video was custom-made for country music icon Hank Williams, JR.
The Michigan rocker now owns the one-of-a-kind motor, which was styled by tailor to the stars Nudie Cohn in 1968, after picking it up at a 2010 auction for $225,000 (£150,000).
The car features six-foot-wide steer horns on the bonnet, a saddle-like leather interior and a six-shooter gearstick, according to CMT.com.
The website reports the motor was an exhibit in the Smoky Mountain Car Museum until a Texas lawyer added it to his collection of classic cars in 2006. It was then auctioned off in March 2010 after the owner died in a car accident.
The Pontiac also graces the cover of Kid Rock's new album, also called Born Free.