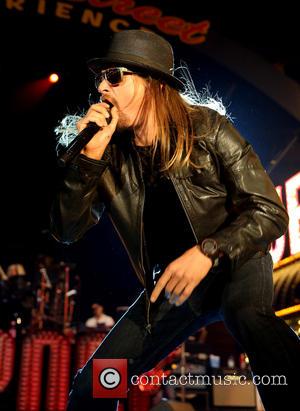 Kid Rock insists he was a great dad to his young son when he first started tasting success, because although he would parade his conquests in front of his boy, he'd always show up as a father.

The Born Free hitmaker accepts he wasn't a conventional dad but her never let his son, Robert, Jr., down after winning custody of the boy following a difficult legal battle with the boy's mum.

He says, "I'd be driving the field trip (on) Monday after I'd banged, like, four hookers... Well, not hookers, but... four nice girls on Saturday night in Cincinnati.

"He knew I was wild. I didn't hide any of that but it was kind of our dirty little secret together. He saw girls come in an out, which probably wasn't the healthiest thing. I tried not to do it too much, but f**k, I had a d**k and I was famous at that time... I was wild, but I showed up to work on Monday to be a father."

Rock's son, 21, is now a student at Belmont University in Nashville, Tennessee - and he's set to become a dad.

The proud grandad-to-be says, "He really is a great kid. That's my best accomplishment by far. I'm nervous for him because I know it's (parenting) a lot of work, but he's got a good girl. I'm excited for him."