Khloe Kardashian has not left Lamar Odom's side since he was admitted to hospital earlier this week. 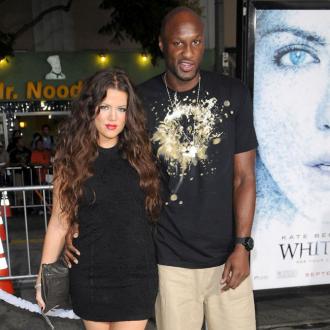 Khloe Kardashian has been with Lamar Odom 24/7 since he was admitted to hospital.

The reality TV star has been making all medical decisions for the basketball star since he was admitted to hospital after collapsing at a Nevada brothel during the week, as their divorce has not yet been signed off by a judge, and Khloe has not left his side for even a moment.

A source told Us Weekly: ''Khloe has been making the decisions and it has been very hard on her. Making these decisions is very hard. Kris [Khloe's mother] came and was very helpful and supportive. Most people have been waiting in a waiting room outside the room and will go in one at a time. Khloe has really been the only one in the room 24/7, sleeping by his bedside and keeping vigil.''

A source told E! News that the former L.A. Lakers player gave the 'Keeping Up with the Kardashians' beauty a thumbs up and said, ''Hey, baby,'' before going back to sleep.

Another source confirmed he is speaking and functioning, and that his family, including his children, Destiny, 17 and Lamar Jr, 13, with ex-girlfriend Liza Morales, are all by his side at Sunrise Hospital in Las Vegas.

Alvina Alston, a spokesperson for Odom's aunt, JaNean Mercer, told 'Entertainment Tonight' he said, ''Good morning'' to his doctors and when asked if he wanted to see his children, he replied: ''Yes''.

But an insider told gossip website TMZ that doctors believe it's still too early to tell whether Lamar will be able to sustain breathing on his own, so they plan to go back and forth between a mask and a ventilator before officially deciding to take him off life support.

The athlete was allegedly found with ''virtually every drug imaginable'' in his body and suffered multiple strokes.