Khloe Kardashian has defended Kylie Jenner's relationship with Tyga because she herself was ''f***ing someone in their 20s'' when she was just 16 years old. 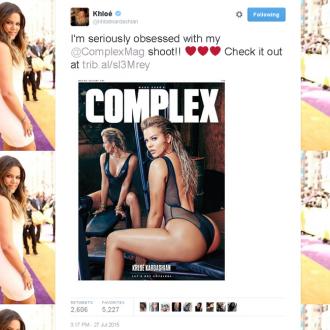 The 'Keeping Up with the Kardashians' star doesn't think it is fair that her younger half-sister, 17-year-old Kylie Jenner, has been criticised for dating 25-year-old musician Tyga because the teenager's life is so different to that of most people her age.

Asked if she thinks the criticisms of the couple are fair, she said: ''I think at 16 I was probably f***ing someone that was in their 20s, for sure. I wouldn't say I was even dating, probably just sleeping with them.

''But again Kylie is not a normal 17 year old. You're not gonna say, 'Hey, so what are you doing this weekend?' and have her say, 'Having a slumber party at my girlfriend's,' or 'Going to prom.'

''That's not what Kylie does. Kylie is taking business meetings and bought her first house, or she's going on a private plane with Karl Lagerfeld to take a meeting.

''That's not even what people do in their 30s. It's a rare circumstance, so let's treat this as a special case.''

The 31-year-old reality star has previously been embroiled in a war of words with Amber Rose over the model's remarks towards Kylie but Khloe insists she wasn't ''s**t shaming'' her rival - because she used to be ''sl*tty'' herself.

She told Complex magazine: ''I just feel like it was unnecessary for her to say anything, and I used her own quote back.

''It was from her talking about when she became a stripper so I'm like,'''How are you judging and saying Kylie should have a curfew?' What I thought was crazy was she was telling my sister to act a certain way or have a curfew, but [she wasn't] doing the same. So just don't comment.

''How was I sl*t-shaming by saying don't throw stones at glass houses? There was no sl*t-shaming. I am not one to sl*t-shame, I have done sl*tty behaviour myself.''