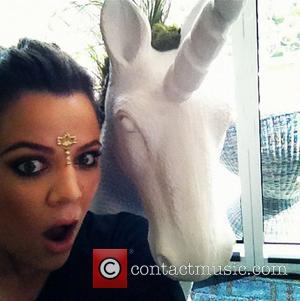 Picture: Khloe Kardashian posted this image of Kourtney Kardashian with a unicorn on Instagram with the caption: 'Is that a unicorn I see?'

Well, Khloe Kardashian's tenure as host of X Factor USA got off to a bizarre star this week. Flanked by co-host Mario Lopez, all eyes were on the reality star who...well...we'll let Simon Cowell explain.

Midway through the show, the judge tweeted, "I think the air conditioning is on high tonight looking at Khloé." He later repeated the joke live on the show, which about three people in the audience got, given they were all 7-years-old. After one Twitter fan told Khloe "I don't get the air conditioning joke." the reality star came out and made it crystal clear, replying, "I think I had a little nip action earlier LOL". The rarely shy Kardashian sister shrugged the whole thing off anyway, later tweeting, "Already half way into the show - and I must say I LOVE LOVE LOVE my new job!!!" before adding, "Thank you guys so much for tuning in to The X Factor tonight!!! Now I'm rushing to Staples for the Clipper game!!!!" Her husband Lamar Odom was making his seasonal debut for the Clippers, which the team won 101-92 over Memphis.