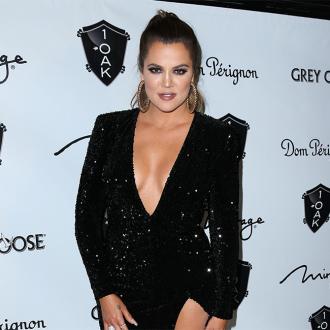 The 30-year-old reality TV star and her former beau were spotted at the Q x Armani bash following the 57th annual ceremony held at the Staples Center in Los Angeles but, despite their history, it is believed they didn't speak.

A source told E! News: ''French was on the side of the bar while Khloé chatted with the girls a foot or so away from the bar.''

However, the 'Keeping Up With the Kardashians' beauty, who arrived at the party with her half-sisters Kendall, 19, and Kylie, 17, seemed keen to catch the rapper's attention.

The source explained: ''Khloé was animated, laughing, and joking waving her hands in the air with the story she was telling. French had his arms folded on the bar leaning up against it chatting to his friends, and would look on to Khloé every once in a while.''

The brunette beauty called time on her relationship with French, 30, in September following just seven months of dating as she felt she wasn't ready for a romance so soon after her split with husband Lamar Odom in 2013 .

Khloé cut ties with the basketball player following four years of marriage amid allegations of drug use and infidelity.

However, she is still waiting for their divorce to be finalised, despite filing the legal papers over a year ago.

Speaking to her sister Kourtney, 35, last year on an episode of 'Kourtney and Khloe Take The Hamptons', she said of her split with French: ''I jumped into something because I was lonely and destructive. But now I'm like, I just want to be alone ... I gotta grieve, I'm still married.''