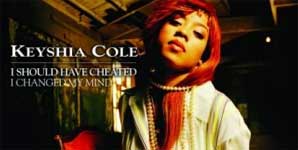 Keyshia Cole's voice has been described as a cross between the gritty streetness of Mary J Blige's voice and the emotion laden funkiness of the late Aaliyah. The descriptions are apt as she went through some hardships growing up in the rough neighbourhoods of Oakland (where at the age of 12 she did a song with MC Hammer).

Her double A side CD 'I Should Have Cheated/I Changed My Mind' has 3 double time remixes of her third but initially more successful single 'I Should Have Cheated' which reached number 4 on the Billboard Hot R&B/Hip Hop singles chart last year. It also has the Radio Edit of her current (and first) single which was originally released in the states in 2004, 'I Changed My Mind' produced by Keyshia/Kanye West/Ron Fair.

The song samples Alain Toussaint's 'Get out of my life, woman' and could easily be 'Get out of my life, man' as it talks about a sister giving up and moving on from unrequited love over a typical Kanye West stop start bass groove. The CD also has a remix of the same song featuring Shyne.