The critically-acclaimed series returns for a fifth outing on Netflix.

There's no denying the cultural impact 'House Of Cards' has had throughout its four seasons to-date, as one of Netflix's staple original series and standout exclusives. Now returning for a fifth season, the series shows no signs of slowing down, with a trailer released today (May 1) that offers a look at what could be some of the darkest episodes yet.

Now that Frank Underwood (Kevin Spacey) has claimed power as the President of the United States, he's got his eyes set on an even bigger venture; "One nation, Underwood." The idea of "one nation" is something that's been thrown around in the real political world for some time, but it's not an idea that many give much credence to, partly because it would mean being a part of a dictatorship.

That however doesn't seem to be something Frank is all too worried about, instead vying for power through whatever means possible. His wife, Claire Underwood (Robin Wright) also returns, standing by Frank's side and enjoying the life the two lead. Will the pair lead the country into a war so that they can "work with fear", now that they admit they're done with "trying to win over people's hearts"?

Kevin Spacey and Robin Wright return to 'House Of Cards'

Of course, there's still the controversy surrounding the Underwood family following the truthful yet unproven allegations thrown in Tom Hammerschmidt's Washington Herald story. How far will Frank go to ensuring that any comments, no matter how true they are, remain a work of fiction in the eyes of the public?

Michael Kelly and Neve Campbell are back as Doug Stamper and LeAnn Harvey respectively, while Joel Kinnaman and James Martinez make up the recurring cast as Will Conway and Alex Romero. 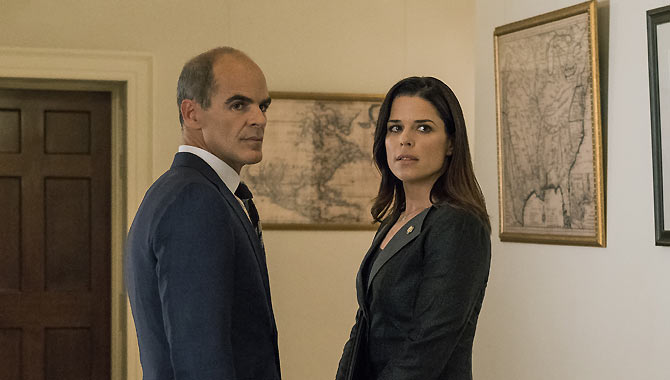 This season is different to the four before it, in that it's the first without creator Beau Willimon. Now, Willimon has been replaced by senior series writers Melissa James Gibson and Frank Pugliese.

'House Of Cards' returns to Netflix for its fifth season with all episodes made available on May 30, 2017.