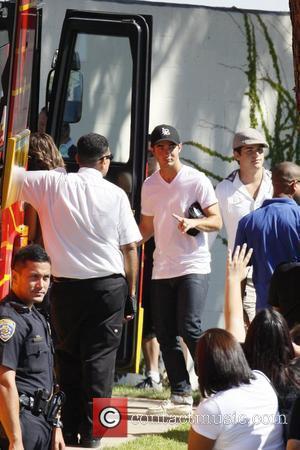 Picture: Kevin Jonas and Danielle Jonas Jonas Brothers board a tour bus after winning the final softball game against the Marquis Jets at the Long Beach...

Kevin Jonas celebrated his one-year wedding anniversary in style on Sunday (19Dec10), whisking his wife DANIELLE to the Walt Disney World Resort in Florida.
The pop star wed his longtime girlfriend in a romantic ceremony at Oheka Castle in Long Island, New York on 19 December, 2009.
The Jonas Brothers star treated his wife to a pre-Christmas trip to Florida over the weekend (18-19Dec10) and on Sunday they headed to the Magic Kingdom to enjoy the theme park, before staying over at the resort on the night of their anniversary, reports JustJared.com.