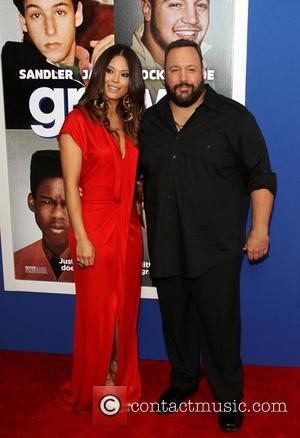 The star was reminiscing about his fighting days while promoting the Grown Ups sequel when host Katie Couric brought the professional tough guy out from backstage, after showing off a photo of the two men together as students.

James said, "He was the greatest partner. He was awesome... He's the nicest guy in the world but also the craziest guy I've ever seen in my life. Jumping off the roof of his house."

Foley also shared the love, adding, "Kevin was the toughest kid in school - one of only two people in the 300 pound bench press club."

Foley revealed he and his high school pal stayed in touch for 25 years but hadn't spoken in about five, prompting James to promise to check out his old friend on his upcoming stand-up comedy tour.

There was also a surprise for James' Grown Ups 2 co-star Adam Sandler on the show - his Manchester Central High School gym teacher Don Tibbetts was in the audience for the show.

The funnyman told Couric that Tibbetts was "like having a friend in school," adding, "You never considered him a real teacher, you thought he was your buddy."