'Teenage Mutant Ninja Turtles' co-creator Kevin Eastman thinks the upcoming reboot film will be similar to blockbuster feature 'The Avengers' and reveals it will have state of the art CGI. 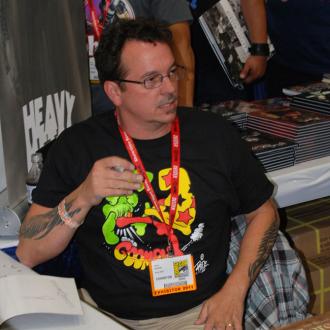 Kevin, who created the original children's comic book along with Peter Laird, thinks the upcoming reboot film will be just as good as Marvel's blockbuster movie and other successful films with exciting fight scenes and CGI.

Talking to NBC, he said: ''From what I've seen of the script, it's fantastic... We're talking about being inspired by movies like 'The Avengers' for scope and roots origin and 'The Raid: Redemption' for fight scenes and 'Rise Of The Planet Of The Apes' as far as computer-quality style.''

The film, to be directed by 'The Texas Chainsaw Massacre' filmmaker Jonathan Liebesman and produced by Michael Bay, may even see original star Corey Feldman return to reprise his role as Donatello after he hinted he would get involved if Jonathan were to offer him the part.

Corey, who voiced the turtle in the 1990 and 1993 films, told MovieWeb: ''Michael Bay and I have become social acquaintances... We have traded cell phone numbers. We have been in communication.

''I have let him know that I support the project. He has let me know that he is a fan of my work. We are communicating.

''I wouldn't say there has been a formal offer, or anything like that. It's not even really going to be Michael Bay's decision. It's going to be the director's decision.''

The film's release date has been pushed back from winter 2013 to summer 2014.