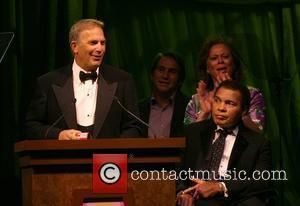 Kevin Costner fans have the chance to win a dinner date with the actor - he is auctioning himself off to raise money for the children of a woman who died at a Canadian music festival.
The star and his band Modern West were just about to perform at the Big Valley Jamboree in Alberta, Canada earlier this month (01Aug09) when a tornado brought the stage down, killing festival-goer Donna Moore, 35, and leaving 80 others injured.
Speaking after the event, Costner insisted he would return to Alberta to play a benefit concert there to mark the tragic death.
And now he has decided to raise money by auctioning off a dinner date and giving the proceeds to Moore's two sons, aged 16 and 10.