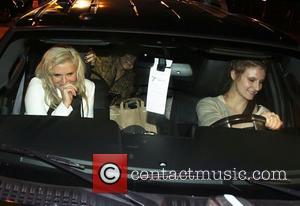 Picture: Kesha aka Ke$sha 'The Book of Mormon' Opening night held at the Pantages Theatre - Outside Hollywood, California - 12.09.12

Kesha has set the pop world in a spin with her new single ‘Die Young.’ In true Ke$ha style, the track is an uncompromising slice of up-tempo pop with clipped drum beats, heavy synths and, of course, Kesha’s trademark rapping. The chorus features the lines “I hear your heart beat to the beat of the drums / It’s such a shame that you came here with someone / So while you’re here in my arms / Let’s make the most of the night like we’re gonna die young.” So far the song seems to have won over those that have caught a first glimpse of the track.

Perez Hilton nailed his colours to the mast pretty firmly, with the headline “Ke$ha’s New Single Die Young Is A Killer!” and posted the song on his blog for fans to listen to. Hilton said the song “has us getting up and dancing like there’s no tomorrow” and seems that he’s not the only one. The team over at Popcrush.com were equally excited at the prospect of a new single from the 25 year-old American and surmised that it had been “well worth the wait.”

Over on Twitter, the response has been equally enthusiastic. The user Obsessed With Cody (@Ria11Rialove) posted a message to say “What is the most important thing that you should do to... — listen to Ke$ha's new song DIE YOUNG which is amazing.” Chuckie Finster was just as excited, though his finger seemed to have got stuck on the ‘E’ button, as he said “KESHA'S NEW SONG IS FIREEEEEEEEEEEEEEEEEEEEEEEEEE.” It’s not all good news though: Spin magazine’s Marc Hogan called the single “disappointing.” We reckon a few more spins will win him over though.