Actress Kerry Washington Posted Messages On Twitter.com During The Early Stages Of Her Labour In A Bid To Keep Her Baby's Impending Birth A Secret. 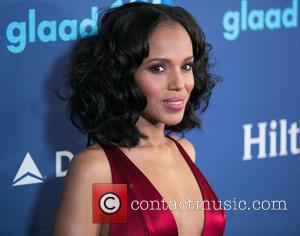 Picture: Kerry Washington - A variety of stars were photographed as they arrived to the 26th Annual GLAAD Media Awards which were held at The Beverly...

Washington often watches episodes of her hit TV show Scandal as they air in the U.S. and tweets along with fans, answering their questions about the plot.

The practice has become a weekly ritual for Washington, and when she went into labour prior to the birth of her daughter Isabelle last year (14), she decided to keep tweeting amid fears her social media silence would give away her big secret.

She tells Net-A-Porter.com's The EDIT, "Every Thursday within three weeks of my daughter Isabelle's due date, I loaded up pre-tweets based on the episodes and what I would want to say. I tweeted in the very early stages of my labour. I figured that if I went completely silent on social media, then people would know I was in the hospital!"

The notoriously private star and her husband Nnamdi Asomugha managed to keep the news quiet for nearly a month after Isabelle was born.