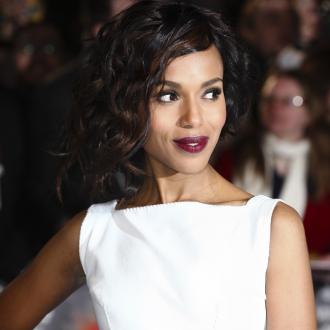 The actress struggled getting into character for the Quentin Tarantino-directed spaghetti western film, in which she plays a downtrodden slave called Broomhilda who is separated from her husband, the titular Django (Jamie Foxx).

Speaking to BANG Showbiz at the UK premiere of the film at the Empire cinema in London's Leicester Square last night (10.01.13), Kerry said: ''I found all of the scenes difficult. To wake up everyday and be told you're not fully human is a challenging thing to embody.''

In one particular part of the film - which takes place when slavery was legal - Kerry's enslaved character is whipped by her owner, a scene that the 35-year-old beauty found particularly challenging.

She said: ''Obviously that was very difficult, but luckily I was surrounded by real artists. The men that I get to work in this film, they are so devoted to the art and so supportive of me, they really allowed me to feel like I was safe to be in those vulnerable situations.''

Co-star Christoph - who has been nominated for an Oscar for his role as Dr. King Schultz - shared her sentiment, telling BANG: ''It wasn't easy making the film. It was very long. We shot for almost nine months. We went from extreme cold... This [London weather] is kindergarten compared to the cold we shot in Wyoming at minus-thirty centigrade.''

Other stars who walked the white carpet at the premiere included leading men Jamie Foxx and Samuel L. Jackson, as well as director Quentin Tarantino.