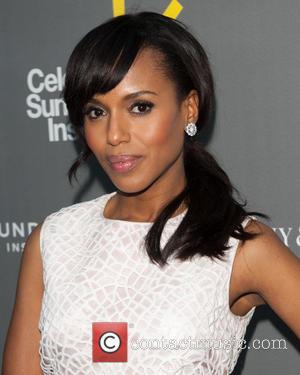 Picture: Kerry Washington - The newlyweds are believed to have bonded over their shared love of philanthropy as both are involved in former U.S....

Actress Kerry Washington used her appearance on Saturday Night Live this weekend (02Nov13) to address the controversy surrounding the lack of black females on the U.S. comedy show's cast by mocking the recent criticism aimed at programme producers.

The Django Unchained star, who made her hosting debut on Snl, opened the show with a skit in which she had to play all the black female characters, from U.S. First Lady Michelle Obama to Tv talk show host Oprah Winfrey and singer Beyonce, since there were no other African-American women on the cast to take on the roles.

While running off-stage to change from Mrs. Obama to the Tv titan, a voiceover stated: "The producers at Saturday Night Live would like to apologise to Kerry Washington for the number of black women she will be asked to play. We make these requests because Ms. Washington is an actress of considerable range and talent - and also because Snl does not currently have a black woman on the cast. Mostly the latter. We agree this is not an ideal situation and look forward to rectifying it in the near future, unless, of course, we fall in love with another white guy first."

The segment also featured the five white males who were recently added to the cast, playing different versions of Matthew MCConaughey, and ended with a cameo appearance from U.S. civil rights leader Reverend Al Sharpton, who stopped by to say, "What have we learned from this sketch? As usual, nothing."

Washington further poked fun at the racial casting controversy by making reference to her hit U.S. Tv drama Scandal, in which she plays a political fixer, during her opening monologue, joking that she was "so happy to be part of a show that in 2013 has the courage to cast a white man as president".

However, there was one topic the actress made no mention of during the show - her reported pregnancy. Washington is said to be expecting her first child with American football star Nnamdi Asomugha, who she secretly wed in June (13).