Kerry Washington is expecting her first child with NFL star Nnamdi Asomugha and says her baby bump is her ''best accessory''. 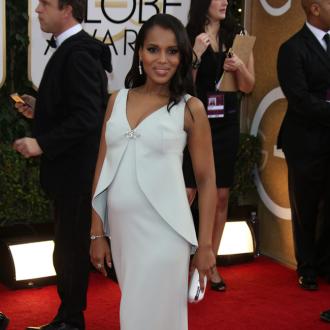 Kerry Washington says her baby bump is her ''best accessory''.

The 36-year-old actress is expecting her first child with NFL star Nnamdi Asomugha - whom she married in an intimate ceremony in Hailey, Idaho in June last year - and said she didn't need a date for the Golden Globe Awards because she is carrying a child.

Kerry - who was nominated for Best Actress in a TV Drama Series for 'Scandal' for her role of Olivia Pope - wore a white Balenciaga gown to the ceremony which she felt suited her changing shape perfectly.

Speaking about the dress, she told NBC: ''I feel he designed it more for this bump, which I'm really happy with.''

And the actress, who had never officially confirmed her pregnancy until last night, admitted life couldn't be better for her at the moment.

She said: ''I feel like, I just feel very blessed. Life is truly extraordinary right now.''

Though Kerry lost out to 'House of Cards' star Robin Wright for the Best Actress prize, she previously said she felt ''humbled'' to be nominated alongside actresses such as Julianna Margulies, Tatiana Maslany and Taylor Schilling.

She previously said: ''I'm enormously grateful to the Hollywood Foreign Press for this honour. It's humbling to be nominated alongside such great talented and hard-working women whose work inspires me.''