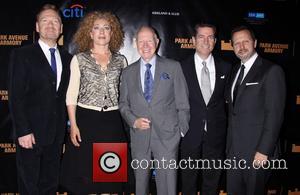 British thespian Kenneth Branagh is the new darling of the New York theatre scene after winning rave reviews for his "epic" and "breathtaking" stage debut in the Big Apple.

The actor/director took his production of William Shakespeare's MACbeth across the Atlantic after launching it in Manchester, England last summer (13), and the curtain went up at the Park Avenue Armory's Drill Hall on Thursday night (05Jun14).

Branagh, who co-directed the show with Rob Ashford and stars alongside Alex Kingston, has won rave reviews for his turn as the tragic Scottish king and for the immersive production.

Joe Dziemianowicz of the New York Daily News gave the show five stars out of five, writing, "Any MACbeth rises or falls on the actor in the title role. Silver-tongued, sexy and deft with a sword, Branagh oozes charisma and carnality as his MACbeth murders his way to the throne - and his undoing. It's about time Branagh graced New York audiences with a flesh-and-blood Shakespeare star turn. It was worth the wait."

The New York Times' Ben Brantley writes, "This is the summer blockbuster that we wait for every year and too seldom find at the multiplexes, one of those action-packed, spectacle-drenched shows that sweep you right into their fraught, churning worlds and refuse to release you until the lights come up - and maybe not even then."