Kendra Wilkinson: 'I'm Determined To Save My Fractured Marriage' 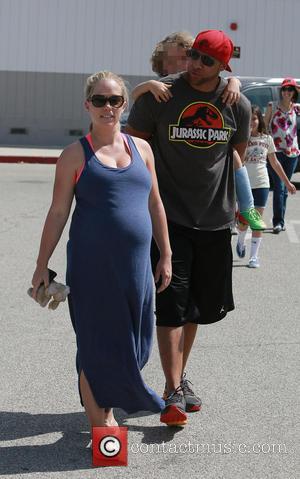 Former Playboy model-turned-reality Tv star Kendra Wilkinson is determined to save her troubled marriage to retired sportsman Hank Baskett for the sake of their two children.

The couple's five-year union was rocked this summer (14) amid reports suggesting the former American footballer had cheated on Wilkinson with a transgender model - allegations he denies.

Wilkinson remained silent throughout the tabloid drama, but she has now opened up about the rumours and the status of her marriage in a candid interview with People magazine.

The busty blonde admits their relationship suffered while she was pregnant with their second child, daughter Alijah, as she battled body insecurities, and she was so "miserable", she forced Baskett to sleep on the couch.

The pair was back on good terms following the tot's birth in May (14), but the relationship took another big hit in June (14), when the affair rumours first surfaced.

Wilkinson kicked Baskett out of their house as she tried to come to terms with the accusations, and although she still has no idea if there is any truth to the cheating claims, she is not yet ready to give up on her marriage.

She tells People magazine, "I can't have him in the house right now. I've come so close to the divorce. I have met with lawyers. But the one thing I can't forget are these two kids. And this is still the guy I married, the man that I love so much. I really don't want this marriage to end... I'm ready to forgive Hank, it's just that I need to know the truth first."

Wilkinson has also been seeking advice from her ex-boyfriend, Playboy mogul Hugh Hefner, who she dated for four years before splitting in 2008.

She says, "I went to Hef and asked what he thought, and he said he didn't believe it happened. He also made me realise we're all human and make mistakes. Still, he thinks Hank was set up. So I really don't know what to believe. One thing I do know is that Hank isn't gay, and I don't believe he has a transsexual fetish. Those are my beliefs.

"He's in a lot of therapy right now, so hopefully he gets to a place where he tells me the truth. I can't live my life wondering. I've cried all the tears I could cry. Now I just need to breathe and see what naturally happens."

The couple will give fans an insight into its fractured relationship in the new season of its U.S. reality show, Kendra On Top, which premieres next week (03Oct14).